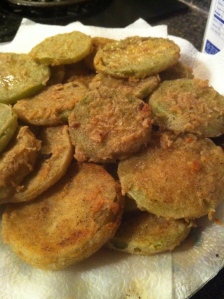 So who here has been to Gulf Shores & eaten at Lulu Buffet’s restaurant? We go down to the gulf almost every summer for vacation. It’s close to home & it’s nice to get away. Lulu’s is a fantastic “touristy” restaurant down there owned by Jimmy Buffet’s sister. She makes the best fried green tomatoes! Now if you’re a true Southerner then you know that everything is better fried and especially green tomatoes! Fried green tomatoes are exactly what they sound like, tomatoes that are still green and not ripe yet, fried. Lulu’s fried green tomatoes are served with this spicy dipping sauce that is just wonderful! Andrew and I have a huge garden, and I really seriously mean HUGE! It takes up a large portion of our backyard. We have over 20 tomato plants! So now we have several large tomatoes that are still green and Andrew wanted me to attempt the Lulu’s special. If you’re not great at frying, it’s okay, tomatoes are probably one of the easiest things to fry! 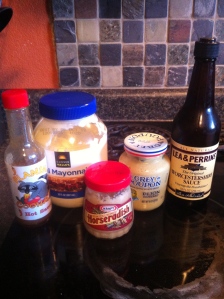 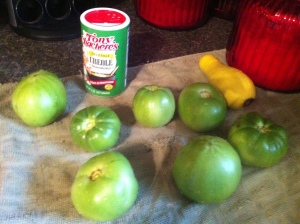 -Cut up green tomatoes into round slices. (Yes, that’s one lonely squash that’s going to get fried too)

-In a shallow bowl mix together 3 cups of self-rising flour & 2 Tablespoons Creole seasoning (I didn’t actually measure out the seasoning, I just poured a whole bunch in and it was probably way more that 2 Tbs) 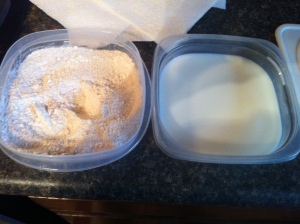 -Fill a large frying pan about an inch full of vegetable oil and heat up on low-medium heat.

-Dip the tomatoes slices in the flour mix, then in the milk mix, and then back in the flour until it’s well coated 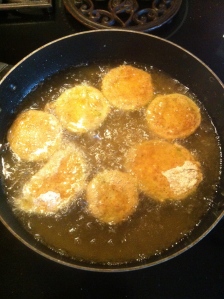 -Let drain/dry on a plate covered with paper towels 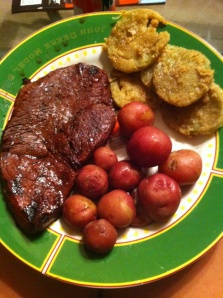 This was our dinner last night; steak, fried green tomatoes, and new potatoes (from our garden also) Yummy!