When we realized harvest was going to start super late this year Andrew came home with the bright idea to head back to Disney World for the opening of Star Wars Galaxys Edge at Hollywood Studios. Since this was super last minute (literally booked about 5 days before we left) and with a major opening event, I was pretty nervous about the crowds. I started looking up dining and fast passes and was surprised to find that there was a ton of great things available! As our departure date got closer Hurricane Dorian started gaining strength in the Caribbean with a projected path straight towards Disney World. It was expected to make landfall and and slam Orlando the day we were supposed to head home. We knew we would never make it out of Orlando that day so we pushed our plans back 2 days and decided to ride out the hurricane at Disney!

This trip was really special for me because I’ve always wanted to see Disney at Halloween, but since we’re row crop farmers it’s nearly impossible for us to get that far out of town during our busiest time of the year! All the heavy rain during spring really pushed our planting season back which in turn pushed harvest way back and gave us a fall break!

For this trip we once again stayed at Disney’s Contemporary resort in a main tower theme park view room, our favorite!

Once Magical Express dropped us off at the Contemporary we took our stuff to our room then hit the monorail for dinner at Epcot. Dinner at Via Napoli is one of our favorites! The kids love the pizza, I love the pasta, and Andrew loves the white sangria. Actually, we both love the white sangria! It’s worth a pitcher for sure!

Our first day was actually opening day of Galaxy’s Edge so we decided to completely avoid it and good choice, the crowds at HS were crazy!

At this point Hurricane Dorian has turned into a huge major hurricane and was destroying the Bahamas 😦 so many people started canceling their Disney trips for the week. This turned out to be great for us with nonexistent crowds the rest of the week!

Day 2 we got up early and were at Hollywood Studios by 7am. Rhett got to meet Buzz Lightyear for the first time and that was the highlight of his trip! There was also zero people at Slinky Dog Dash and we rode multiple times with no line and no fastpasses!

A couple days before we left 3yo girl twin Lorelei jumped off the water slide bounce house we have at home and broke her tibia! She got a cool purple waterproof cast and on our way we went! I was really dreading how difficult this would make our trip since we have 4 little kids and she couldn’t walk. I headed to guest services at Epcot on our first day and got a wheelchair pass for her stroller. This allowed us to take her stroller through the regular lines so we didn’t have to carry her the whole time. It was so nice! We just cruised the stroller through the regular line or FASTPASS line and when we got to the end we would pick her up and put her into the ride and the stroller would be waiting for us when we got off! 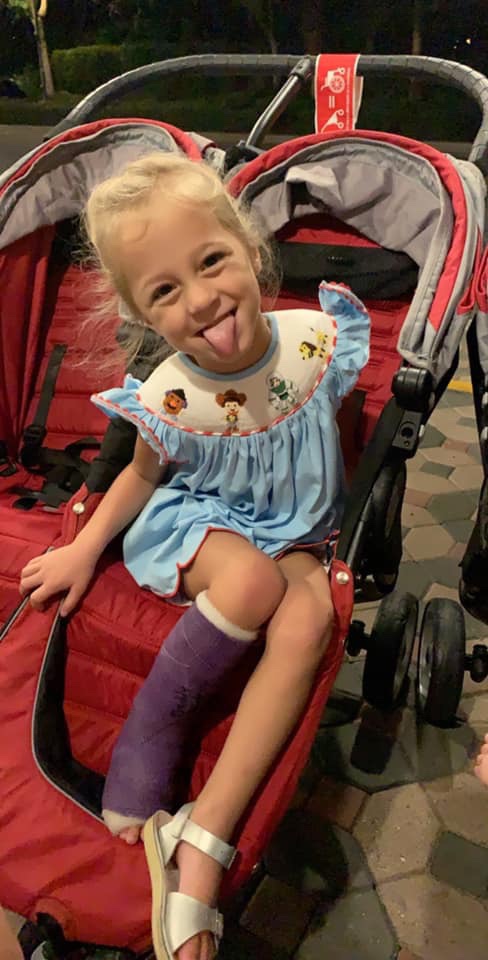 We don’t really do tv or electronics in our home and our 2yo Magnolia is really shy so on our last trip we were blown away by how much she loved Vampirina which is a totally random character for her! Because of this we had to go back to Disney Junior breakfast at Hollywood & Vine! 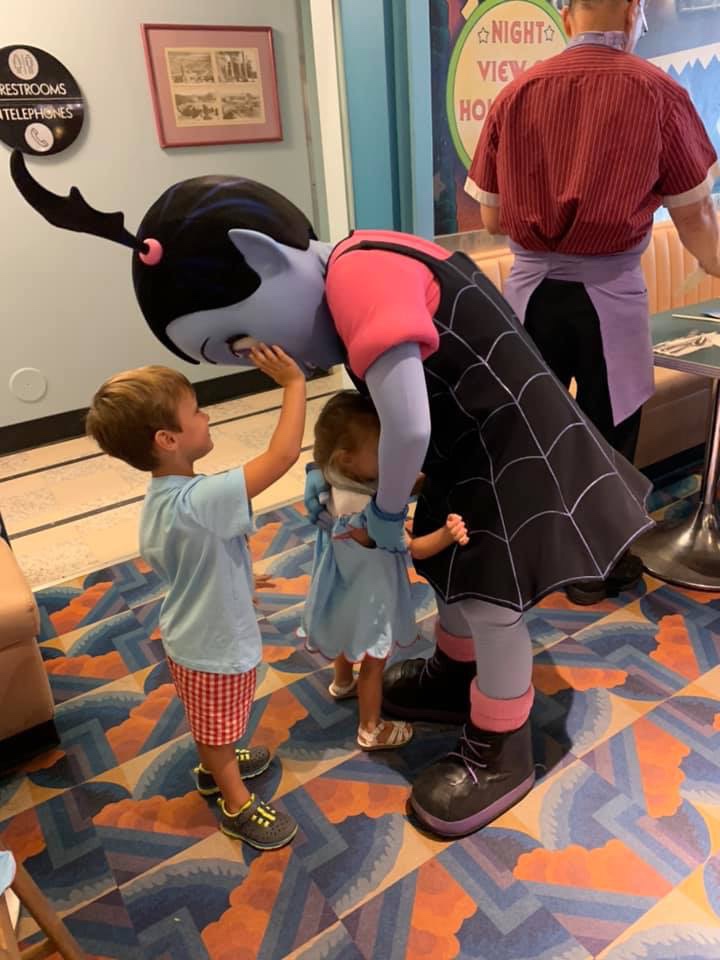 We are not Star Wars fans, actually, we’ve never even seen the Star Wars movies, but while in Rome…so we decided to try to brave the crowds and check out the new Land. I’m so glad we did! Galaxy’s Edge is amazing! The attention to detail, the cast members, everything was awesome! Our kids aren’t tall enough to ride Smuggler’s Run and with no fastpasses we decided to skip it, maybe next time! Rhett was really amazed by the Storm Troopers walking around and he saw Chewbacca for the first time and is now obsessed! Of course we had to check out the drink bottles which by the way you cannot take in your carryon or checked luggage per TSA!

We headed back to Epcot for the afternoon to grab some food at Food & Wine festival. The Korma Chicken in India is soooo good! Also, a favorite is the Mimosa Royale and chocolate baclava in Morocco!

We love Turtle Talk with Crush over in the Seas pavilion and of course they asked us tons of questions because we were sitting in the front row!

For dinner we had reservations at Coral Reef which was excellent! The kids really loved the views of the aquarium and our food was great!

The next morning we headed to Animal Kingdom for our usual breakfast at Tusker House. Andrew’s favorite attraction at AK is the Festival of the Lion King show which we had awesome floor seats for this time! 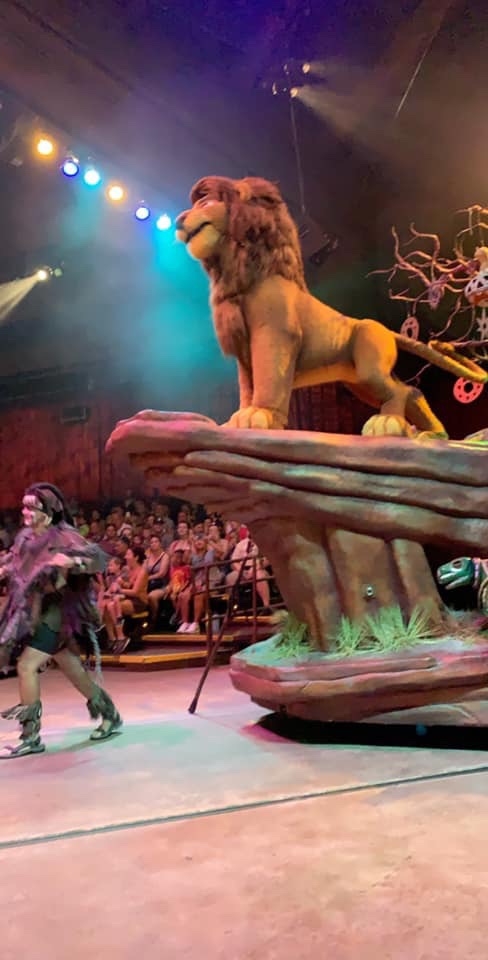 The twins also got their faces painted which turned out so cute! It’s right outside the entrance to Kilimanjaro Safari 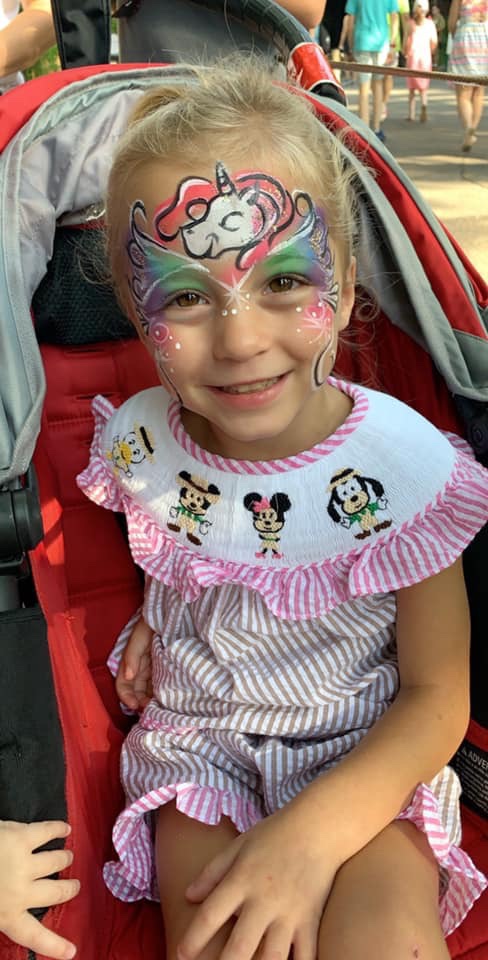 For what was supposed to be our last day we grabbed a quick breakfast at Be Our Guest then enjoyed a crowdless day at Magic Kingdom! There was literally no one there, we were even able to have dinner at Cinderella’s Royal Table last minute walk up! 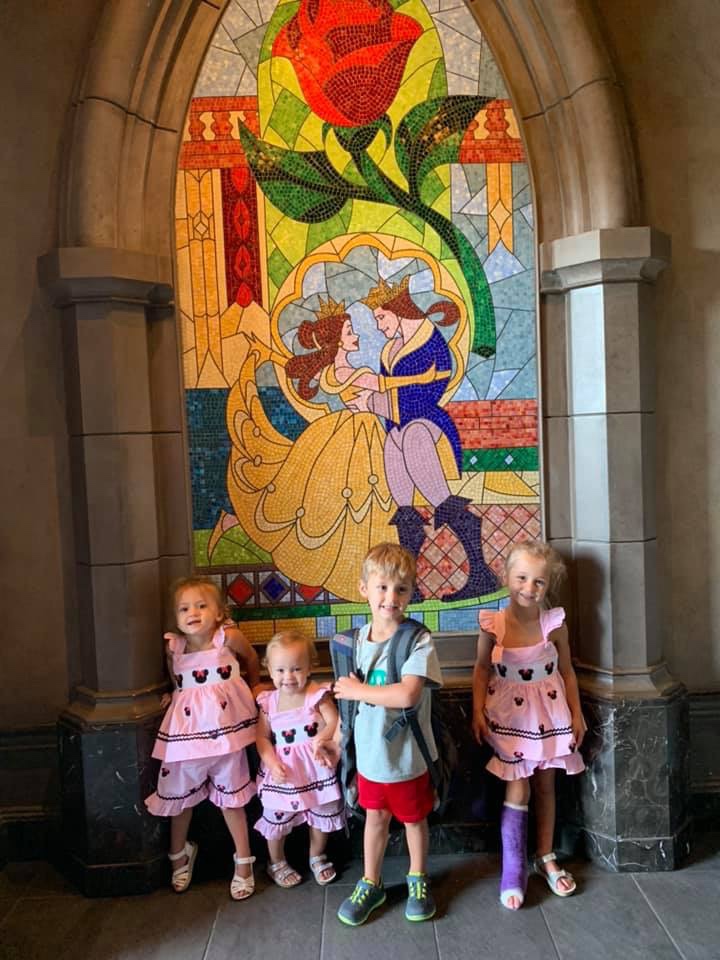 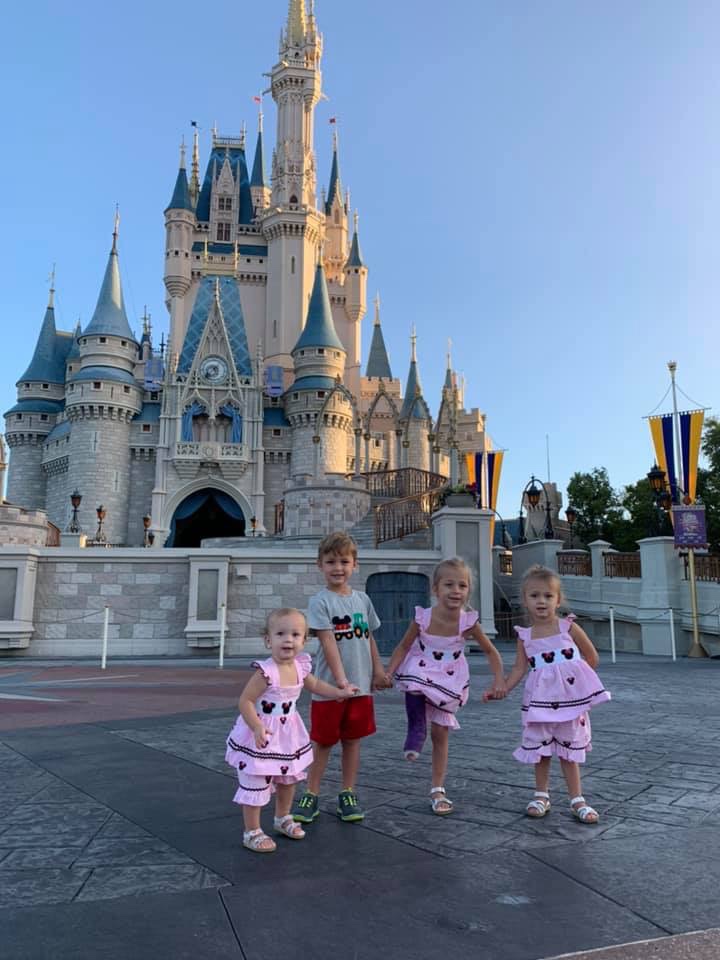 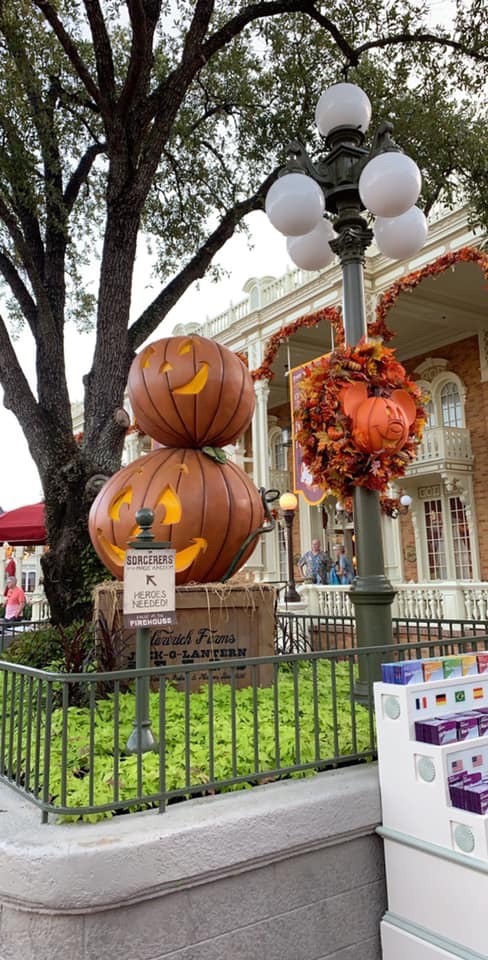 At some point during the day we found out our flight for the next day had been cancelled and the airport was planning on being closed for 2 days. Soooo we got stuck at Disney for 2 more days! Terrible, I know! We got our flights rearranged for later in the week and the staff at the Contemporary was super helpful getting our room extended and with a special discounted hurricane rate!

With basically no one at Disney and 2 completely unplanned days we had breakfast in our resort at Chef Mickey’s and then we headed back to Hollywood Studios to get a better feel of Galaxy’s Edge! And Rhett ended up getting his resistance pilot flight suite! 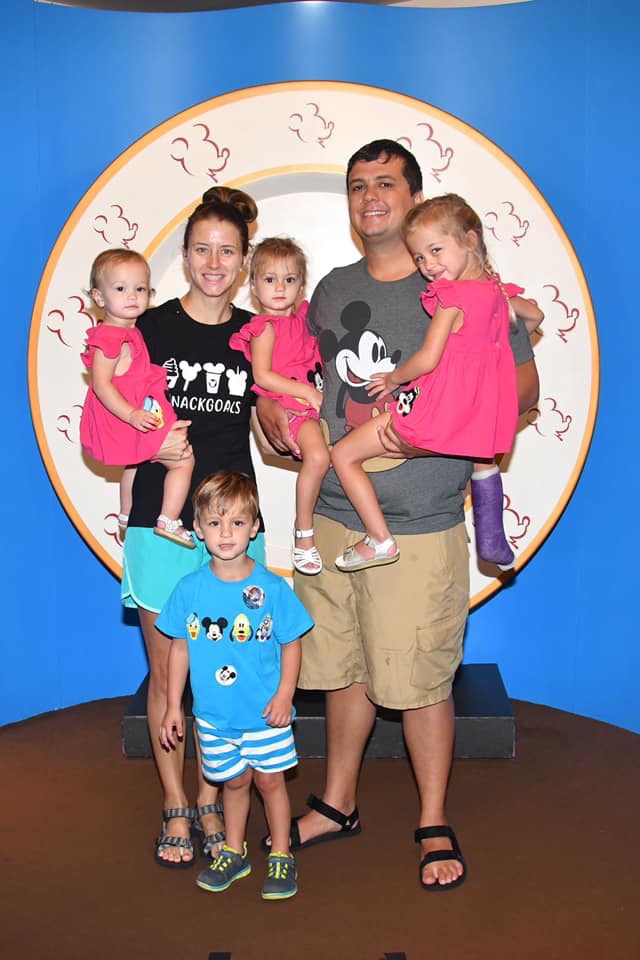 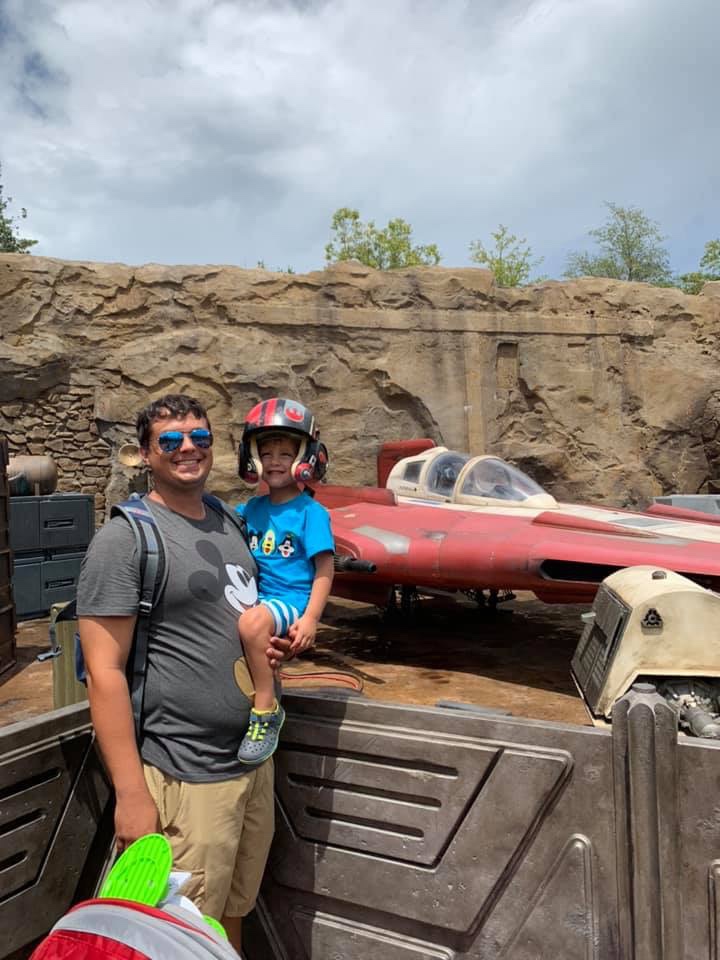 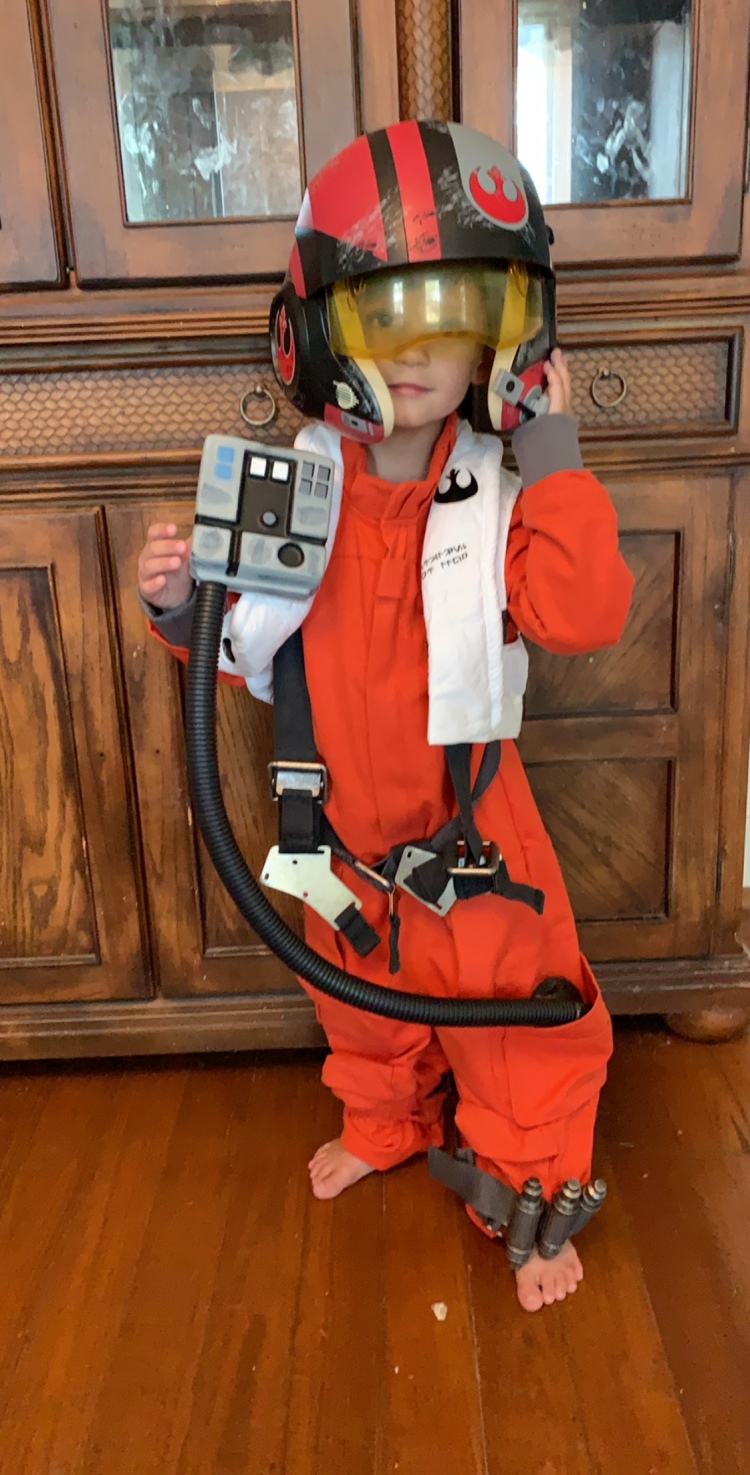 We had lunch at Mama Melrose and have to say that will be our last time. We had eaten there before a few years ago and had a really bad food & service experience but decided to give it another chance. Bad idea. Once again the service was pretty bad and so was the food. Definitely marking it off our list.

That night we had a wonderfully magical dinner at Le Cellier in Epcot! Our server, David, was fabulous and so was our food! The kids really loved their magic water too! 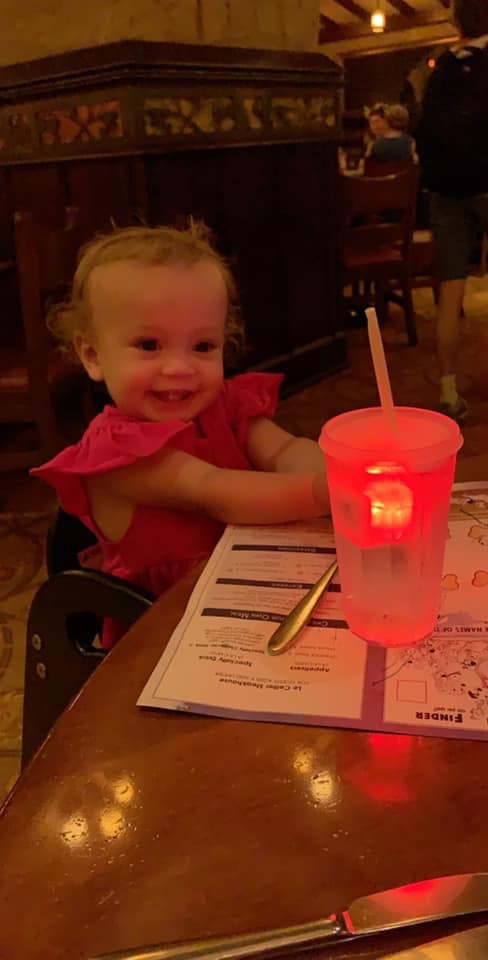 The next morning we had breakfast at Tusker House which ended up being AMAZING! We have eaten at TH so many times in the past but for the first time ever we got to take a group picture with all the characters! Typically this isn’t allowed because it would take up too much time and the restaurant is usually packed, but because of Hurricane Dorian there was literally no one there but us! 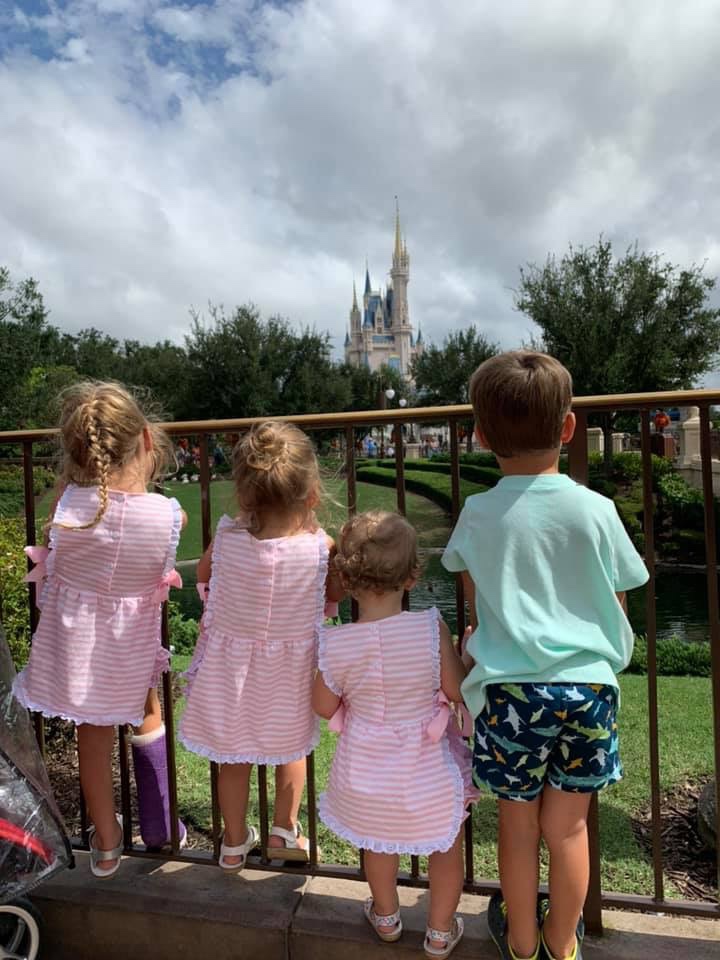 This is a dinner shot of Crystal Palace character meal which shows just how empty the parks were!

Once again we decided to give Be Our Guest dinner another chance and this time I’m actually glad we did! Our service was still slow, but much better! As always, the food was great! It’s still the only place to meet the Beast who Rhett loves and his reaction alone is worth it! 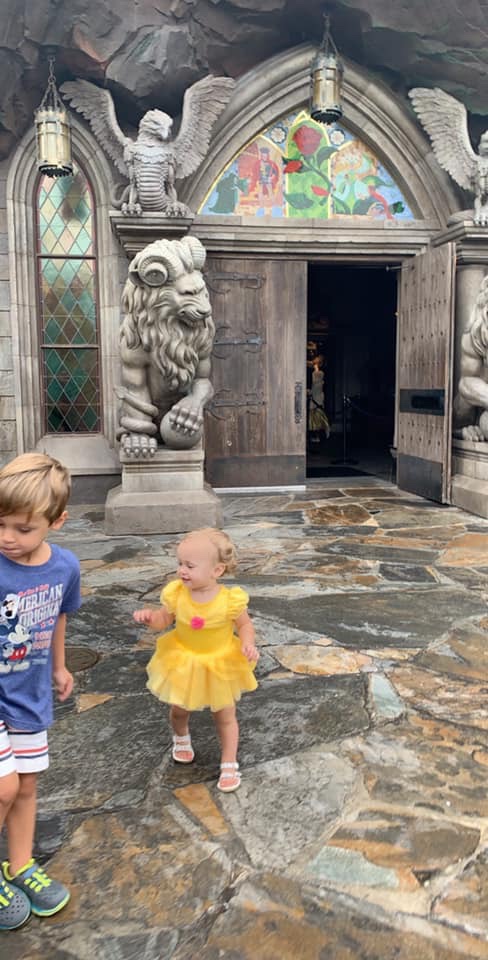 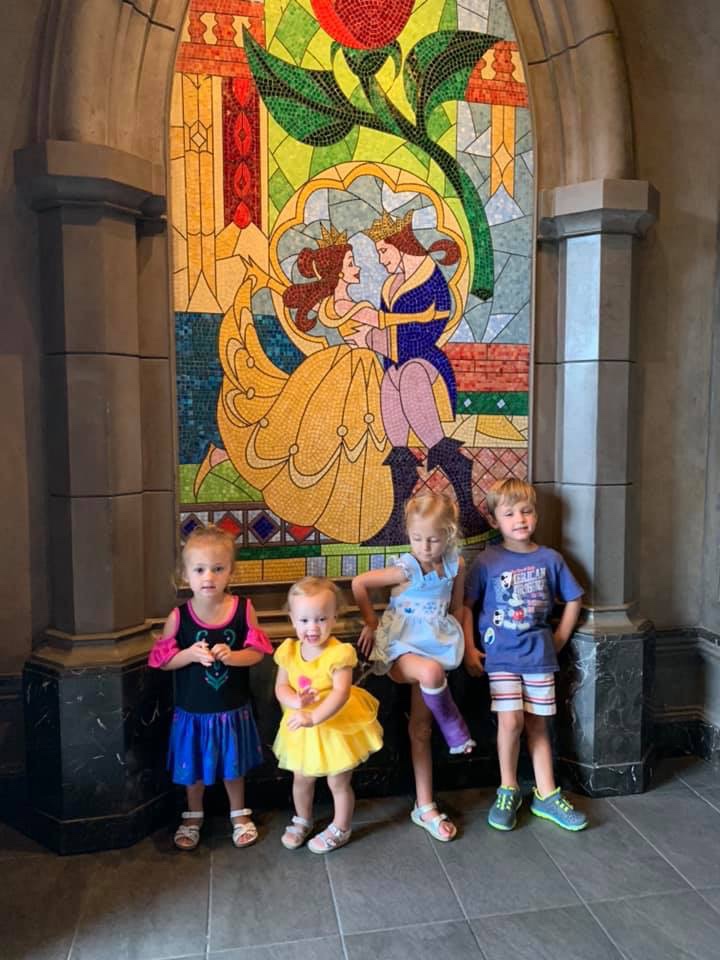 Our spur of the moment crazy hurricane induced Disney trip turned out to be one of the best trips we’ve ever had! We typically don’t park hop or at least only do a full day at a park and dinner at Epcot which is close to our resorts, but on this trip we did multiple parks every day because crowds were so low and it was so much fun!

If you need help planning a Disney trip please email me at kayla@teacuptravelco.com My services are free and I would love to help plan your magical vacation!